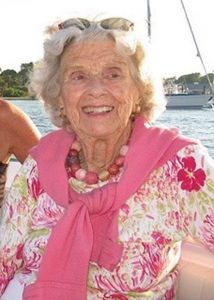 Born in Aiken, S.C., on March 28, 1930, to George Houk Mead of Mead Paper Co. and Elsie Talbott Mead, a philanthropist, Marianna was raised between Aiken, Washington, D.C., and Dayton, Ohio. She was the youngest of six children (Louise, George, Talbott, Nelson, and Katharine), and love of family and a life of service to others were instilled from an early age.

Marianna became more widely known as Muffin when attending Garrison Forest School, and spent summers serving as a courier for Frontier Nursing in Kentucky. Muffin attended Briarcliff College before her happy working days at Harper’s Bazaar in New York. She met Junie at Camp Keewaydin, and they married on June 18, 1955, in Dayton. The O’Briens shared a full and happy life raising their four children and serving as dorm parents, teachers, advisors, and mentors at Groton School. Muffin played an integral role in the coeducation of Groton School, and from 1974 to 1980 served as assistant to the headmaster for special events, and head of student activities. When not racing around campus cheering on hockey and baseball teams, or singing in the school choir, Muffin was whipping up her signature chocolate chip cookies, waffles, and Aunt Martha’s casseroles — all consumed by ravenous teenagers during parlor games and advisee meals.

Upon retiring from Groton in 1980, the O’Briens relocated to Boston, where they founded O’Brien Associates, an educational consulting firm to guide families in secondary school placement. Muffin was a trustee of Miss Porter’s School in Farmington, Conn., from 1976 to 1981, and also served as interim head of school from 1992 to ’93.

Never one to be idle, Muffin was also a trustee of Applewild School, the Boys and Girls Clubs of Boston, the Massachusetts Society for the Prevention of Cruelty to Children (MSPCC), and the Council for Religion in Independent Schools (CRIS). She further contributed to the Epiphany School, Mother Caroline Academy, Beacon Hill Village, and the Chilton Club, where she served as governor, then president from 1994 to 1997. At Trinity Church, she was a lay reader, member of the Befrienders group, and on committees for the Trinity Hospice Associates and the Sherrill House.

Muffin, Junie, and their family enjoyed Martha’s Vineyard for 60 years, entertaining family, friends, and former students on their Havoc House porch overlooking Edgartown Harbor. Sailing with her brother Nelson’s family, cocktail cruises, beach picnics, singing toasts and dinners at EYC with her lively friends brought Muffin endless joy. As a grower and giver of love all of her life, Muffin tended her magnificent flower garden, choosing select blooms to display on the St. Andrew’s Church altar down the street.

The O’Brien family greatly appreciates Muffin’s compassionate caregivers throughout the years. The family will hold a private interment service, and looks forward to a larger memorial gathering at a later date to celebrate the wonderful life of Marianna Mead O’Brien.