Gloria Alexander of Martha’s Vineyard and Sarasota, Florida died peacefully on December 22. Gloria lived for her family. She was a loving wife and a doting mother and grandmother, always smiling and ready with a hug. 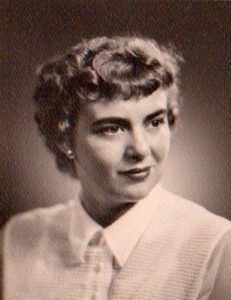 Gloria was born in Springfield, MA and first began summering on the Vineyard in the MVCMA as a young teenager. Some of her favorite times were spent sailing with her college girlfriends aboard the Lazy Lady during their yearly summer visits. In 1943, as a teenage fisherwoman, Gloria represented the Island by meeting with Curt Cowdy, a Boston sportswriter, for catching the largest striper in her class.

Gloria made the Campground a lifelong home, continuing to enjoy summers in her cottage participating in Illumination Nights and other campground functions. Gloria also had a home on Each Chop, overlooking Crystal Lake and Nantucket Sound. She enjoyed sitting on her deck watching ferry boats entering Vineyard Haven and the lovely sunsets.

Gloria enjoyed all kinds of outdoor activities such as skiing, golf, tennis, and hiking. She was a member of the East Chop Beach and Tennis Club as well as a charter member of the Farm Neck Country Club. While living in Florida she became an active golf and tennis member of the Meadows Country Club.

Before retiring to the Vineyard and Florida, Gloria was an elementary school teacher in Connecticut. True to form, she treated her students with the love and kindness that came so naturally to her.

Gloria leaves behind Dr. Albert Alexander, her husband of 61 years, her two sons, Rob and Todd Alexander, her three grandchildren, Justin, Sofia, and Sebastian, and a sister Carroll Norbury.