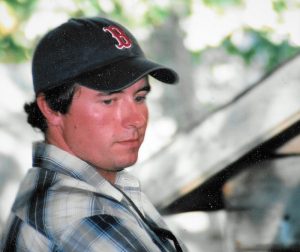 Geoffrey Kirby Codding ‘Geoff’ was born on January 3rd, 1978 as the Vineyard’s New Year baby, and passed away on December 20th after a valiant fight with cancer, with his family by his side. Geoff was a 1996 graduate of Martha’s Vineyard High School and went on to graduate from Green Mountain College in 2000 with a degree in environmental science.

Keeping with his love of outdoors he had a caretaking and landscape business for many years. Geoff was happiest on the water with tight lines. It was a love that he was passing on to his young sons. He joined the Derby when he was old enough to bring his fish in on his own and was on the award stage many times throughout his youth, culminating with a back-to-back Martha’s Vineyard Striped Bass and Bluefish Grand Prize in 2006 and 2007.

The family would like to thank Barbara Rush and all the caring nurses at the MV Infusion Center, Celine Falvey Maney and all the nurses from VNA for their support and kindness and Jefferson (Mohawk) Bolin for his friendship and support. Donations in Geoff’s memory can be made to Martha’s Vineyard Striped Bass & Bluefish Derby PO Box 2101 Edgartown, MA 02539.