Stuart H. Lollis, of Edgartown, MA died peacefully on December 13 of kidney and respiratory failure. He was 78 years old. 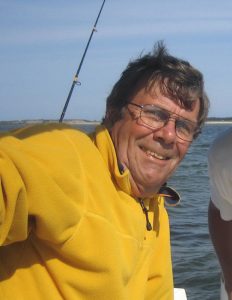 Stuart was born on November 2, 1942, the oldest child of Shelton and Ruth Lollis. The son of an army officer, he had an exciting and varied childhood on military bases across the United States and around the world. He graduated from the University of Pennsylvania in 1964. Having completed Army ROTC, he was commissioned as a second lieutenant and volunteered for service in Vietnam. Upon returning home, Stuart received his MBA from Harvard Business School before beginning a career in marketing. He went on to start a business with his father, helping U.S. manufacturing firms to export their products abroad.

Stuart married Mary Fearey in Edgartown in the summer of 1974. They went on to have two children, Scott and Kristen, and spent many happy years raising them in Bethesda, MD and New York City, while continuing to enjoy idyllic summers on Martha’s Vineyard. Later in life, Stuart and Mary moved to Edgartown full-time, where Stuart was a real estate agent at Priestley, Smadbeck & Mone. He also served on the Edgartown Conservation Commission and the board of the Havenside Corporation. Stuart was a member of the Chappaquiddick Beach Club, where he was instrumental in the formation of the club’s current structure. He served as the club’s President for twelve annual terms. He was also a member of the Edgartown Yacht Club. Among his many interests, Stuart loved sailing his catboat with his family and was involved for years in the hosting of the Edgartown Catboat Regatta.

Stu will be remembered fondly for his wry sense of humor, his incomparable practical jokes, his wise counsel, and most of all, his eternal love for his friends and family.

He is survived by his wife Mary, children Scott and Kristen, daughter-in-law Liz Hunt, son-in-law Brendon Bates, and grandchildren William, Matthew and Julia Lollis, and Andrew and Henry Bates. He is also survived by his sister Helen and her husband Dick Hall, his cousin Wickliffe Kirby and his wife Mary, and a large and beloved Fearey family. A memorial service to celebrate his life will be held on Martha’s Vineyard when conditions allow.

In lieu of flowers, donations may be made to Camp Jabberwocky, CURE International, or the Chromosome 18 Registry and Research Society.