Dr. Malcolm Dunkley, a well-known former physician on Martha’s Vineyard, died Dec. 12 in Sandwich. He was 91. 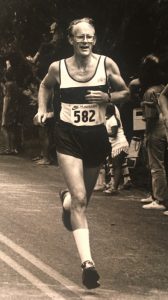 Eric Malcolm Dunkley was born in 1928 to Edward Dunkley and Jane (née Wilkinson) in Cardiff, Wales. He was the youngest of four siblings and an exceptional student, ranking second nationally in higher school certificate leaving exams. After post war national service with the Royal Air Force and then medical school at Cardiff University, he married Margaret Markall. The two had met while working on a mobile X-ray unit scanning the lungs of coal miners while traveling throughout the valleys of South Wales.

With two young children, they emigrated to Canada in 1959, first to Winnipeg where their third child was born and then to Montreal in 1961. Dr. Dunkley practiced as an anesthesiologist at the Montreal General Hospital and as an associate professor at McGill University until 1976 when the family moved to Massachusetts. At the Martha’s Vineyard Hospital, he introduced the use of epidural anesthesia in childbirth which allowed for many births to occur on Island where, previously expectant mothers would have opted for off-Island care.

He was an avid runner who participated in numerous road races and marathons. He was occasionally collected by the police mid-run from his usual route along Lambert’s Cove Road to attend to an urgent case at the hospital. He climbed to the base camps of Everest in Nepal, up Ayres Rock in Australia, and rafted the Río Biobío in Chile. He was an active member of the Holmes Hole Sailing Association. Their home and generous porch off Owen Park served as the clubhouse for a number of years where race results were announced and occasional libations were enjoyed. As he had since wartime as a child in the UK, Malcolm kept an apiary at the Main Street house where neighbors knew to call if a swarm was loose and needed collecting.

In 1989 Margaret died, and in 1993 Malcolm married Sally Ward (née Gibbons). He continued his practice at the hospital until retirement in 1998.

Malcolm and Sally divided their time between Vineyard Haven and Naples, Fla., where her mother was living at the time. Eventually they too took up residence in Naples and spent the summer months in Sandwich, where his son and family were nearby. After 18 years of marriage, Sally died in 2011. Malcolm continued to enjoy frequent visits from family, relatives and friends from Canada, Wales, and the Vineyard. After an unfortunate fall, just days before a planned flight back to Florida, and after a few weeks of medical care, Malcolm succumbed, just before his 92nd birthday. He will be dearly missed by Ann, Christopher, Alison, Rosalyn, Owen, Robert, Janice, Griffin, Truman, Molly, Bob (deceased), Amelia, Simon, Linda, Rachel, Liam, Jonathan, Liying, the Welsh family, and friends.