It is with a heavy heart that we announce the passing of Richard Ross Blackinton of Harwich on Friday, Dec. 4, 2020, at the age of 81. He also resided in Edgartown. 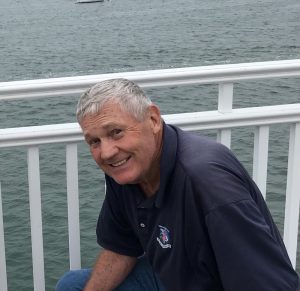 Ross leaves behind his very beloved wife Joanne of 41 years. He was an avid golfer and fisherman, and he enjoyed his life by the sea.

Ross attended the Fessenden Academy, Choate, and graduated from Tabor Academy in Marion, where he excelled in many sports. He was awarded the distinction of All-State in lacrosse, and had a scholarship to University of Virginia. He enlisted in the Marines, and was S2 Infantry MOS 0311, and was honorably discharged in 1964. He was a proud Marine, and carried the honor of serving his country fondly.

Ross founded and operated New England Sterling of Attleboro. He manufactured precious metal goods for Tiffany & Co., Zales Corp., and Shreve, Crump & Low, among many other companies. One of his proudest accomplishments was making the Kentucky Derby Trophy. He began making the trophy in 1975, and the tradition continues with his daughter and son-in-law. In his last years, he loved working and playing at Farm Neck Golf Club in Oak Bluffs, where he got his last hole in one!

He will be greatly missed and joyfully remembered by his five children, John and wife Cheryl Blackinton of Coventry, R.I., Susanne and husband Bill Juaire of Chepachett, R.I., David Blackinton of Edgartown, Elizabeth and husband Wesley Moraes of Greenwood Village, Colo., and Ted and wife Lindsay Blackinton of Darien, Conn. He was the proud grandfather of Skyla Blackinton, Jacob Blackinton, and Amanda Blackinton Porter, Charlotte and Joshua Moraes, and Alexa and Chase Blackinton. Ross also leaves behind his sister Betsy Crawford, and his many nieces and nephews. He was predeceased in death by his mother, Thelma Thoresen Blackinton, and father, John Blackinton; and by his mother-in-law, Tindara Nasise Silvia, and and father-in-law, Edward Silvia.

The family would like to thank Dr. Eric Diamond, VNA of Cape Cod, the Veterans of Foreign Affairs, and Compassionate Care for all their help during his courageous battle with ALS.

A celebration of life will be announced at a later date; please follow the website bostoncremation.org/veterans for details. In lieu of flowers, expressions of sympathy in his memory may be made to the ALS Association, als.org/research, or Compassionate Care ALS, ccals.org.