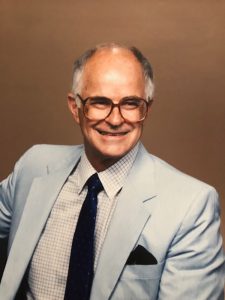 Douglas was born in Rochester, N.Y., to Ethel and Spencer Peckham, later of Troy, N.Y. He grew up in Troy, where he attended School 24 and Troy High School.

Douglas attended the Whitney School of Art (later merged with the Paier School of Art) in New Haven, Conn. There he met his future wife, Barbara Barton Pope, of Hamden. They were married in St. Thomas’ Church, New Haven, on June 14, 1951.

Douglas worked in the display department of Niagara Mohawk Power Co., first in Troy, then in Syracuse, N.Y., for 34 years. After retiring, Douglas moved with his wife to their summer home on Martha’s Vineyard, where they lived for 18 years. There he participated in the art life of the island, serving at one time on the board of the Old Sculpin Gallery in Edgartown. He was the recipient of many ribbons for his watercolor paintings, his pastels, and his photographs. He was named an Island Treasure at the All-Island Art Show in the Tabernacle, where he showcased his work every year. Two of his art pieces are in the permanent display of the Martha’s Vineyard Hospital.

Douglas was an honorary deacon at the Federated Church of Edgartown, where he was quite active.

In early November 2018, Douglas and his wife moved to Omaha, to be nearer to their daughter.

Douglas leaves his wife of 68 years, Barbara; his son, Douglas Jr., and wife Sharon of Chicago; his son Jonathan and his wife Helena of Houston; and his daughter Jennifer Mattea and her husband Jerry of Omaha; as well as his grandchildren Danielle Peckham Burton and her husband Scott, Rachel Peckham, and Cameron Peckham of Chicago; Troy Peckham and Brent Peckham of New York City; and Joshua Mattea, Corey Mattea, and his wife Juli, and Meggin Mattea Webber and her husband Ben, all of Omaha. He also leaves six great-grandchildren, Elijah and Bowie Burton of Chicago; Alex and Ruby Webber of Omaha, and Patrick and Margaret Mattea, also of Omaha. He also leaves his sister-in-law, Shirley Peckham; two nieces, Suzanne Fraser and Sybil Carven, and a nephew, Scott Peckham; and their families. His twin brother, John Spencer Peckham, predeceased him

Douglas’ good-natured laugh, his sense of humor, his love of animals, and his caring personality will be greatly missed by all of his friends and neighbors on Martha’s Vineyard, as well as in many other places.

Services will be private. His cremated remains will be interred in Newton Cemetery in late spring or early summer, and there will be a memorial service around that time at the Federated Church on Martha’s Vineyard.
Please do not send flowers. A donation in his name may be sent to Hospice or the ASPCA.