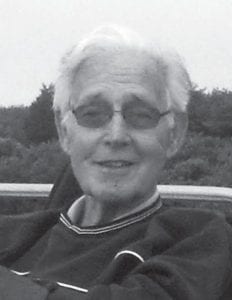 Ullathorne of Duxbury, died on Feb. 1.

Born in Manchester, England, he was the husband of the late Veda Ullathorne. Jack and Veda were married in 1947 in Arbroath, Scotland. The family moved to America in 1966 and settled in Duxbury in 1968.

Throughout his 45 years living in Duxbury, Jack was likely to be found on the soccer field, where he was either coaching players, watching games or patching the turf. As a founding board member of Duxbury Youth Soccer and the Southcoast Girls Soccer Club, his influence can still be seen in the sons and daughters of those he coached.

Jack leaves a daughter, Jeanette Baker, her husband Blair, their daughter Sarah and spouse Tiffany; a son Chris and his wife Kathy (Campbell) and their three children, Connor, Jordan and Dayna; three grandchildren of his deceased son Ian, formerly of Hanson, Tracey Lincoln and her husband Richard, Ian II and Michelle Richard and her husband Wayne (Buddy).

In lieu of flowers, donations in his memory can be made to the Duxbury Youth Soccer Association. Visiting hours are at 3-7 p.m. at the Shepherd Funeral Home, Kingston on Feb. 8. Followed by a service of remembrance.